Since I discovered that Nuke was concatenating Transform nodes for me, I liked to break out my transformations into multiple nodes to give me a bit more flexibility. I would do a stabilize, some keyframe animation, scale up a bit, rotate for a while, matchmove, re-scale, in different nodes. Nuke was smart about it, and because I knew how to not break concatenation, quality was never an issue. However, one cold dark afternoon in late 2013, I have been asked to provide a SINGLE transform node to the CG department (They had a way to add it to their 3D Camera). My move was built from a dozen node, I needed a way to reduce that to one.

Giving up on the idea to calculate all manually, I set off to write a Python script to calculate a merged transform node for me, using the math that I knew: Trigonometry.

This resulted in an extremely heavy script,  with some ridiculous calculations being done. Here is little snippet of just the math:

I don’t know if it’s clear to you, but it’s not to me. Every time I re-read this code, I get a headache for a few minutes until I remember how it worked.

The full script was working, but flawed. It was quite slow to execute, would frequently crash Nuke when trying to execute on too many transforms at once, and would only work with translation, rotation and uniform scale.

It did the job though, and I surprised myself every few weeks since that day by having to use it again and again in different situations. The new problems arose when coworkers started to want to use that script. It had never been meant to be released, and even running it required a bit a python typing for the frame range.

Finally, a few weeks ago, I had enough. That script deserved a proper release. I went back to the drawing board, and decided to re-implement the script using a different method: Matrices.

I didn’t know how to use matrices in 2013, but having completed Khan Academy’s Matrix course a couple of months ago, I felt ready.

With matrices, the math above was greatly reduced.  Here is the actual math in the new function, achieving the same as the previous snippet:

Now that I can wrap my head around.

Using matrices had other advantages, like the fact that Nuke’s Transform node creates the matrix for you, you can access it directly in Python.

It also had challenges:

The first one was the hardest part. While trying to go back from a Matrix to Transform, Rotate, Scale, Skew, Center parameters, I found out that multiple combinations of these parameters could result in the same matrix, and that technically, rotation is a combination of scale and skew. I ended up finding what I needed, which is called a QR decomposition. The Wikipedia page of it seems very complete, but I couldn’t personally comprehend it sufficiently to make code out of it. However, as always, the Web is filled with people smarter than me, and this time I found a post by Frederic Wang which gave me the math a little bit more clearly.  His algorithm was giving me almost the right result, and I had to do some trial and error changes to it to get a 1:1 matching result. I can now calculate every possible case, using Translate, Rotate, ScaleX, ScaleY, SkewX. The result might have different values in some fields than what you would get by calculating manually, but it’s all accurate. I’m basically solving an equation there, and to do so I had too many unknowns, so I manually set SkewY to 0.

The second point I thought would be easier (and it was) but proved a bit more challenging than expected. I had a solution in mind which didn’t work. I ended up recycling code from Ivan Busquets and Magno Borgo (who himself was adapting from Ivan,  Pete O’Connell, and Myself). All these would only calculate the matrix from the 4 corners though, and ignore the extra matrix, or the inverse checkbox, so I added these. I tried for a bit to support the option to disable some corners but gave up since I never personally used these functions,  and it was more work than I was willing to do.

For the third point, I could have easily stuffed my result matrix into the CornerPin’s extra_matrix (which is an option in my script) but I wanted to result in a proper editable cornerPin, so I made a function that projects the 4 corners through my result matrix and puts that in the ‘to’ knobs. (Oh, did I mention that the transform’s matrix knob is a Transform2d_Knob, while the CornerPin’s transform_matrix knob is an IArray_Knob, and that these guys work in very different ways? Well done The Foundry, well done..)

The rest was some cleaning up, making a little user interface for the functions, printing some cool little matrices while the code is running, adding progress bars, etc.. 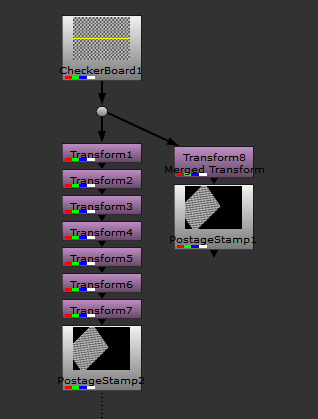 This is the result of running the script.

Edit: This tool has been reworked and is now part of a larger toolset for manipulating vectors and matrices: nuke-vector-matrix-toolset